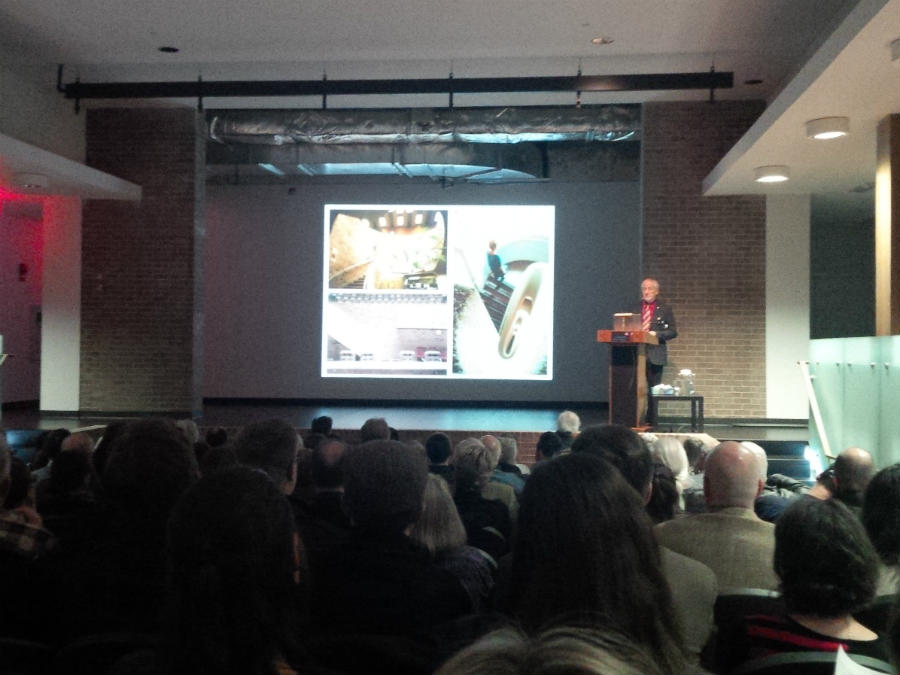 On April 7, a few MORe team members attended the inaugural GVSA/KPL public lecture by Douglas Cardinal, who spoke to a full house and an additional overflow room about his philosophy of “Organic Architecture.” Cardinal is one of Canada’s most acclaimed and prolific architects; at eighty-one, he has enjoyed a career spanning over five decades and has designed dozens of well-loved buildings. The most well-known of these are perhaps the 1989 Canadian Museum of History (formerly the Canadian Museum of Civilization), a curvilinear composition in white stone in Gatineau, Québec across the Ottawa River from Parliament Hill, as well as the National Museum of the American Indian in Washington, DC. Some of his many other projects include churches, colleges, government buildings, and such futuristic forays as the Space Sciences Centre in Edmonton, Alberta.

Cardinal, who is of Métis and Blackfoot heritage, has also worked extensively with Indigenous communities across Canada on projects such as schools and cultural centres. He sees architecture as a method of bettering the devastation wrought by centuries of colonialism and what he describes as contemporary apartheid. His work with the James Bay Cree on the village of Oujé-Bougoumou, Québec, for example, was awarded the United Nations’ “We the Peoples: 50 Communities Award” in the category of Human Settlements, a testament to the power of architecture to positively influence social change. In his lecture, Cardinal spoke of his philosophy of “evolving a building from the needs of the people,” as well as complementing social innovation with technological innovation. An early adopter of computer-aided design, Cardinal stated in response to an audience question that he “likes to live in the question”—an inspiring response to uncertain circumstances.